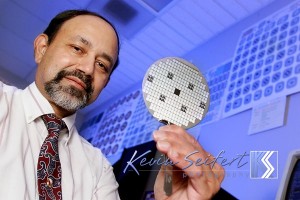 9/14/99
B. Jayant Baliga, an NCSU Distinguished Professor of Electrical Engineering, is one of the most honored electrical engineers in the world. He is most well known for the invention of the IGBT which is used in semiconduction. He has just been granted his 100th patent. He is holding a 4″ silicon wafer which has imbedded power management chips which can extend the battery life up to 50% in devices such as cellphones and laptops by reducing wasted energy from heat loss. Baliga is the founder and chief technical officer of Micro-Ohm Corp.